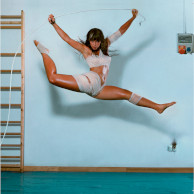 Nathy Peluso aims to provoke, and there’s no limit to her continued growth which is cementing her status as a leading artist in the international music scene. Since the release of her debut album ‘Calambre’ in 2020, the Argentina-born, Spain-based singer, rapper and songwriter has taken the Latin music industry by storm with her genre versatility and explosive performance style. In 2022 alone Nathy Peluso wowed audiences at international forums such as Coachella in California and, Ceremonia in Mexico before headlining some of Spain’s biggest summer festivals, such as the prestigious Sónar (Barcelona) and Mad Cool (Madrid). In September, The Times gave her sold-out London show five stars and called Nathy “on a fast track to superstardom”.

Merit lies in her multifaceted output and insatiable energy: the powerful track “Argentina” with rap sensation Trueno, her racy collaboration with C. Tangana in the bachata hit ‘Ateo’, her bossed-up female empowerment salsa anthem ‘MAFIOSA’, accruing the most viral BZRP Session, #36; and her accumulation of fans across the globe, including a number of trailblazing contemporaries including the likes of Cardi B, Megan the Stallion and J Balvin. Her directorial debut and ode to Camilo Sesto’s unforgettable 1978 hit, 'VIVIR ASÍ ES MORIR DE AMOR', showcases a cinematic, psychedelic, technicolor battle sequence in an official visual.

In November, Nathy Peluso will herald a triumphant homecoming with a sold out date at the Buenos Aires Movistar Arena on November 18, with a second date added to accommodate demand. And to close off an explosive 2022, she will headline her first Wizink Center in Madrid, the most important venue in the Spanish capital for her ‘El Último Calambre’ concert on December 10.